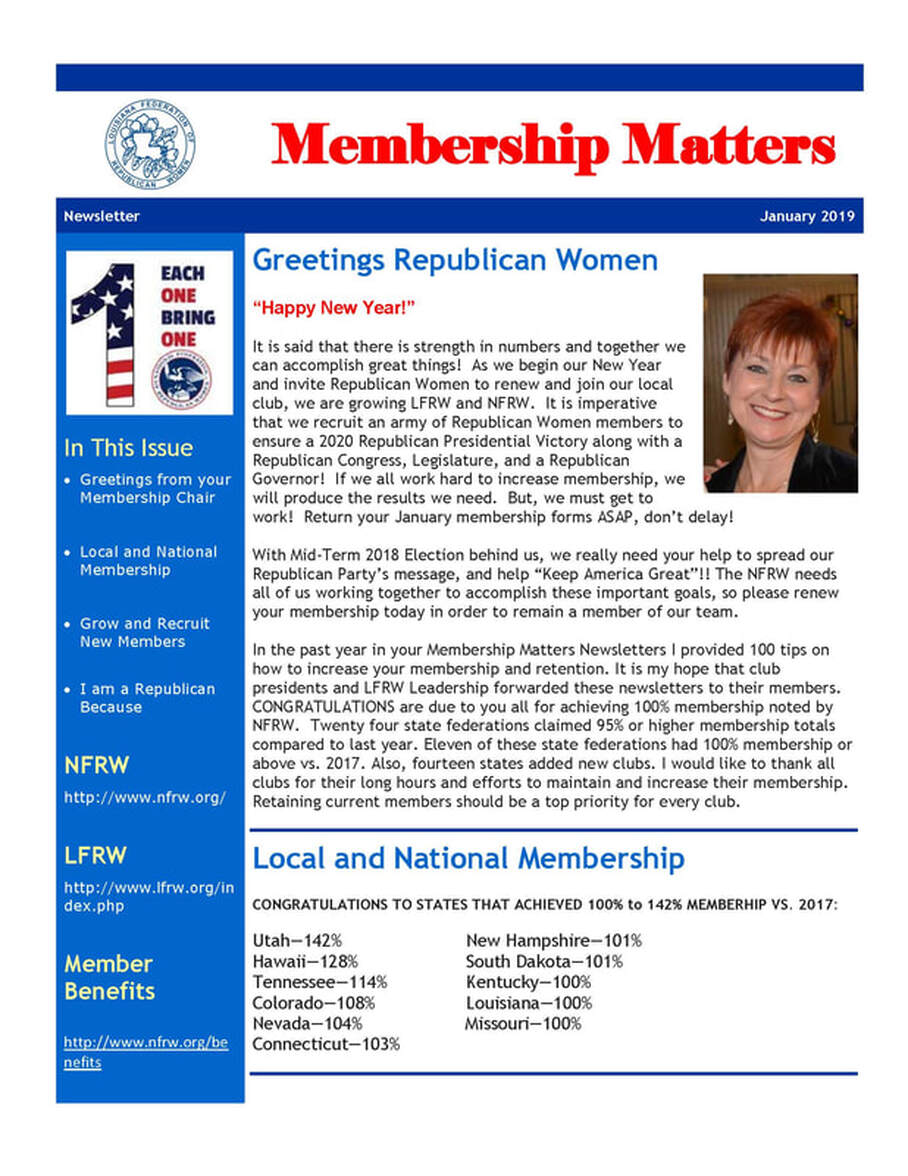 Download Membership Matters Page 1
Download Membership Matters Page 2
​NFRW/LFRW Treasurer JoAnn Parker Wins Prestigious Award JoAnn Parker, current NFRW/LFRW Treasurer, was recently honored for her humanitarian and civic service at the Greater Iberia Chamber of Commerce’s annual banquet. Parker was the recipient of the Chamber’s 2016 Civic Service award and her efforts were highlighted in a video presentation at the ceremony.

According to the GICC website, the Civic Service Award is given to recognize an outstanding citizen who has demonstrated exemplary service through their volunteerism. With so many citizens constantly volunteering in the community for civic projects, various charities, schools, and churches, this award is given to honor those who go above and beyond the regular call of service.

“I am so humbled to have received this honor,” Parker stated. “I keep saying ‘God, don’t You know I’m from Deadwood, Texas?’”

Parker’s passion for service began as a child in that little community of Deadwood, in the piney woodds of East Texas. Parker remembers that there were about 200 residents and “everyone was related”.

“The way I grew up, it didn’t matter who you were, what your creed was or what your color was, if there was a need in our community, you got it done,” she said in a recent interview.

As she grew, her service expanded worldwide. Parker has served as the CFO of Helping Hands International, sending millions of dollars of medical and humanitarian aid to Ukraine. She has also participated in mission trips across the world to nations such as Korea, Bolivia and Australia, as well as locations here in the United States.

“One thing about which I am happy is that my daughters and now my grandchildren have learned the importance of a relationship with God and also about being involved in political and community service,” Parker stated. “All of my girls registered to vote at age 18 and are involved in various church and community volunteer service activities. One of my granddaughters is the Executive Director of an organization focused on feeding children in my East Texas home area. They are all taking what I was blessed to be taught, and what I in turn was able to pass along to them, and are paying it forward into the next generations. That makes me very thankful to God.”

The GICC has posted the honoree video about Parker on YouTube. The video can be viewed at https://www.youtube.com/watch?v=c_Tp-ukT7Q8. Congratulations to JoAnn Parker on her honor as the 2016 Civic Service Award recipient!

Faith Peperone (Metro) has been inducted into the Hall of Fame by the Louisiana Center for Women and Government in recognition of her service to the community and commitment to projects to promote good government. This is the second year an LFRW member has been honored. Last year, Lily B Moskal (Acadiana) was recognized for her record of service and accomplishments.

Jena Bush Hager, daughter of former President George W. Bush and First Lady Laura Bush, was the keynote speaker at the event. Jenna is a contributing correspondent to NBC’s “Today” show; the author of “Ana’s Story: A Journey of Hope,” the New York Times bestseller; a school teacher; and, has served as an intern with UNICEF working with some of the most impoverished families around the world.

​We're So Proud Of Our Honored LFRW Members!
Stephanie Berault, a member of the Slidell Republican Women and a former three-term Chairman of the St. Tammany Parish Executive Committee of the Republican Party is now the new Executive Director of the HeartGift, of New Orleans. It is a new nonprofit organization that helps children with heart defects get the care that they need. Stephanie was also honored for her work with the Cystic Fibrosis Foundation.

Michelle Avery, a member of the Professional Republican Women of St. Tammany Parish and Chair of the West St. Tammany Chamber of Commerce, was named one of the Northshore’s Finest 2010, as was Stephanie, for her work for the Cystic Fibrosis Foundation.

Alicia Irmscher, also a member of the Professional Republican Women of St. Tammany Parish and Flow’s Campaign Chairman, was select as the chairwoman of the St. Tammany Tourist Commission. Alicia was also named one of the Northshore’s Finest 2010 and is the executive Director of Notification is Prevention commission. Alicia spoke at the NFRW Legislative Day in 2009!

Let’s applaud these members! We are so proud.
Two More LFRW Members Appointed to NFRW Board

LFRW is delighted to report that Andrea Caffery (Franklin RW), and Jackie Glover, (Acadiana RW), have been appointed to serve on NFRW Standing Committees by President Sue Lynch. Andrea will join committee chair Suzanne Crow on the Program Committee, and Jackie will work with committee chair Tonya Stiel on the Membership Committee.

In addition, Linda Vinsanau (SBRW) is a member of both the Fundraising and Americanism Committees, and Argiro serves on the Americanism and Speaker’s Bureau Committees.

LFRW is well represented at the top!

LFRW Nominates Kaitlin Dastugue for the National Pathfinder Scholarship
Kaitlin, a graduate of St. Scholastica Academy, graduated in May of this year from Emory University in Atlanta in Political Science and Architectural Studies. Her academic work was superior. She also served as President of her sorority, started The Architecture Club at Emory, and was inducted as a member of the Phi Sigma Alpha honor society, the Political Science Honor Society. In the summer of 2009, she interned for the National Trust for Historic Preservation in Washington, DC.   She also attended the Summer Program in the Graduate School of Design at Harvard University in 2008.

Kaitlin will enter the University Of Pennsylvania School Of Design in Philadelphia to pursue graduate work in City and Regional Planning and certification in Historic Preservation.

The Louisiana Federation of Republican Women is indeed honored to have Kaitlin Dastugue as our nominee for this prestigious scholarship.​

LFRW Members Appointed NFRW Committees...
Six members of LFRW have been appointed to Committees of the NFRW and will be traveling to Oklahoma City in March to attend the NFRW Board Meeting.

Two of our members are Chairs of Standing Committees and have a vote on the NFRW Board - Tonya Stiel and Suzanne Crow. Tonya will head the Membership Committee and our Past President of the LFRW, Suzanne, will lead the Program Committee. Linda Vinsanau will be a member of the Fund Raising Committee, Kristie Thomas will work with Suzanne on the Program Committee, Jackie Glover will be a member of the Membership Committee and our own President, Argiro Morgan, was appointed to the Americanism and the Speaker’s Bureau Committees.

Congratulations to all. We are certain you will make Louisiana proud! 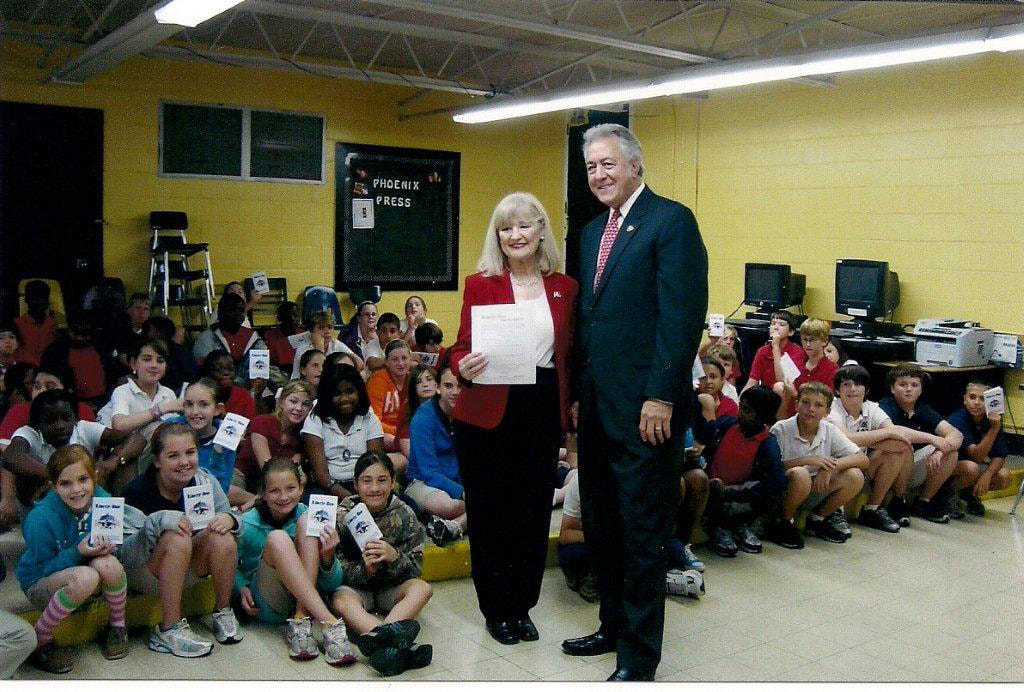 How can we thank Congressman Rodney Alexander adequately? With Gena Gore, our LFRW Regional Vice President (4), Congressman Alexander taught the Constitution to a 5th grade class at Phoenix Magnet School in Alexandria!  The children could not have had a more knowledgeable teacher!  Nor a more patriotic American!
Congressman Alexander not only taught the class.  He purchased the U.S. Constitutions and the teaching materials for each child in the classroom!
​
We are so proud and so grateful!
Congressman Rodney Alexander – LFRW salutes you for your generosity, your time, your unfailing energy, and most especially your service to our nation!